2018 Crystal Prize for transparency awarded to PLUS and Philips

On 29 November, two organisations were named the winner of the 2018 Crystal Prize: PLUS and Philips. They both excel in terms of chain transparency, according to their annual corporate social responsibility reports. In them, the two businesses demonstrate responsibility for potential organisational risks as well as their direct or indirect impact on people, natural capital and the environment.

Together with the winners, the criteria for the 2019 Transparency Benchmark were also announced. 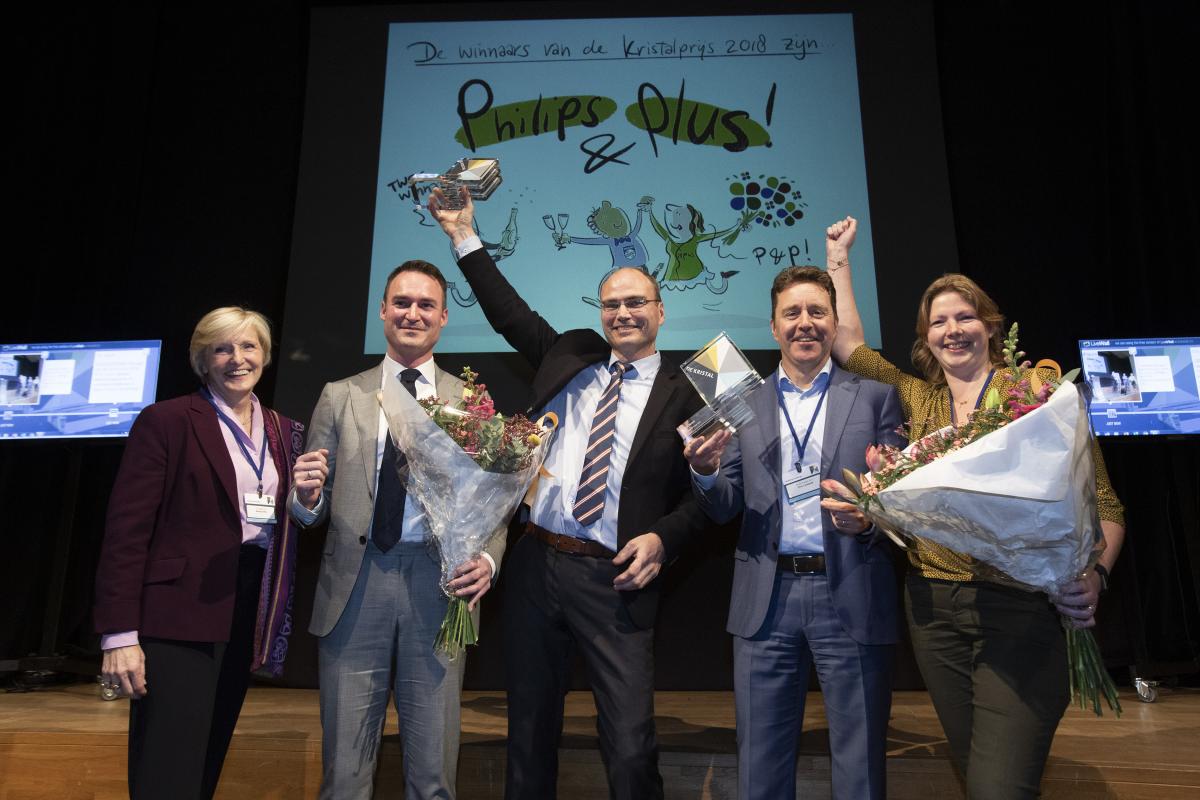 The winners of the Crystal Prize. Photo: Henriette Guest/National government

“While PLUS is a ‘best practice’ in its sector, Philips is a shining example of chain management”, explained Monika Milz, who chaired the jury of the annual Corporate Social Responsibility prize.

View all photos of the ceremony.

Among the four nominees, the jury found a clear dichotomy between two multinationals on the one hand and two surprising organisations on the other. While the former (Philips and Unilever) have a history of high scores on the Transparency Benchmark, the latter (PLUS and Zeeman) focus instead on one or a few national markets. As the two groups defy comparison, the jury decided to award two Crystal Prizes for this year.

Distinctive within the sector

Strong assets of both PLUS and Zeeman included their transparency, clarity and insightful reporting. What made the difference to the jury was the distinctive place within the sector: “PLUS is a ‘best practice’ in its sector with regard to the elaboration of its chain management and the clarification of its responsibilities”, stated Milz as chair of the jury.

The nomination of both Philips and Unilever is praised by the jury, as it reaffirms their lasting position as front runners in the field of chain management. Awarding the prize to Philips reflects the impressive insight that its “Environmental Profit & Loss” and the associated maximum assurance provide. In the eyes of the jury, Philips serves as an innovative example not only within its sector but also for any other organisation reporting on chain management.

Mr David Pappie, director of Top Sectors and Industrial Policy at the Ministry of Economic Affairs and Climate Policy, presented the updated criteria for the Transparency Benchmark (pdf). The aim of the new criteria is to anchor the design of integrated reporting on corporate social responsibility in the 2018 annual report, which will mark the winner of the 2019 Crystal Prize.

The Crystal Prize is a joint initiative by the Ministry of Economic Affairs and Climate Policy (EZK) and the Royal Netherlands Institute of Chartered Accountants (NBA). The Netherlands Enterprise Agency (RVO.nl) is responsible for its implementation. Past laureates of the Crystal Prize include Royal BAM, Alliander, AkzoNobel, NS, Philips, DSM and KPN.

Read the jury report for the 2018 Crystal Prize, additional information on the Crystal Prize and the criteria for the 2019 Transparency Benchmark.
Thursday, 29 November 2018